Airline stocks fared rather well in the second-quarter 2021 earnings season, which concluded recently for the industry. Even though most airline companies incurred losses in the June quarter akin to the last few quarters, quarterly loss was narrower than expected in most cases as well as better than the year-ago quarter’s results.

The picture was also upbeat on the top-line front with passenger revenues increasing massively as the resurgence in economic activities coupled with increased vaccination during the April-June period spurred air-travel demand (particularly for leisure). As an evidence, passenger revenues increased 541.7% and 361% at United Airlines (UAL Quick QuoteUAL ) and American Airlines (AAL Quick QuoteAAL ) , respectively. The huge rise in passenger revenues, which in most cases form the key component of the top lines of airlines, drove total revenues above 100% on a year-over-year basis.

This phenomenal year-over-year growth can be primarily attributed to easy year-over-year comparisons as second-quarter 2020 was worst hit by the COVID crisis. As a result, the favorable second-quarter results failed to add any significant impetus to the stock price of the airlines. In fact, the Zacks  Airline  industry has decreased 3.6% so far this month. 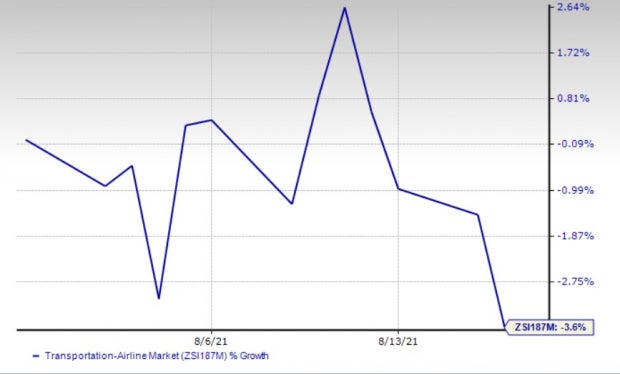 One of the primary causes for the southward price movement despite an impressive earnings season is the spread of the Delta variant of the coronavirus. This highly contagious strain induced a spike in the number of cases as well as increased hospitalizations in the United States with Texas and Florida experiencing the most horrible outbreak in months. Due to this renewed surge in COVID-19 cases, the gradually improving air-travel demand scenario suffered a setback with slackening bookings and rising! cancellations of air tickets.

Consequently, Southwest Airlines’ (LUV Quick QuoteLUV ) management had stated earlier this month that it will be difficult for the company to be profitable in the September quarter. With the Delta variant denting air travel big time, this Dallas-based carrier presented a grim picture with respect to close-in cancellations (cancellations close to the date of travel) for the current month.

As a result of this deadly mutant, the presently Zacks Rank #3 (Hold) carrier, which was profitable in July, now expects its August 2021 operating revenues to decline in the 15-20% band from the August 2019 actuals. The current estimation is worse than the previous outlook of a 12-17% decline.

Assuming the current trend to continue at least in the near term, Southwest Airlines expects operating revenues for the month of September and third-quarter 2021 to decrease in the 15-25% and 15-20% ranges, respectively, from the corresponding levels achieved in the comparable period of 2019. You can see the complete list of today’s Zacks #1 Rank (Strong Buy) stocks here.

Denver-based ultra-low-cost carrier Frontier Airlines also warned that the rapid spread of the Delta variant is affecting bookings in recent weeks. To contain the spread, the Transportation Security Administration intends to extend its directive,  which requires people to wear masks on airplanes, trains and buses as well as at airports and railway stations through Jan 18, 2022. The original order was enforced until Sep 13, 2021. Heightening the woes, coronavirus cases are spreading again in some other parts of the globe like China and some European nations other than the United States

Disruptions in the form of inclement weather, technical problems and staff shortages recently forced the likes of Spirit Airlines (SAVE Quick QuoteSAVE ) and American Airlines to cancel multiple flights, causing harassment for passengers. Management at Spirit Airlines recently stated! that it ! had to cancel 2,826 flights in the Jul 30-Aug 9 period, which contracted revenues to the tune of $50 million.

Moreover, the current geopolitical tensions like the burning situation in Afghanistan are another headwind to the already weak international air-travel demand. The increase in fuel costs with oil prices moving north is also no way good news for the aviation stocks as far as the bottom line is concerned. Evidently, at JetBlue Airways (JBLU Quick QuoteJBLU ) , fuel price per gallon surged 98.8% year over year in the second quarter to $1.91. The metric in the September quarter is estimated to be $2.09.