Thanks to a June swoon, my beloved Chicago Cubs started throwing around the dreaded “r” word. As a lifelong fan, I’ve become used to this sort of thing in most years. But still, it didn’t make it any easier.

Rebuild. That’s sports talk for jettisoning your highly-paid stars, writing the season off as a loss, and regrouping next year with a younger core of prospects.

Sure enough, General Manager Jed Hoyer dealt away most of the starting lineup in a flurry of one-sided trades. The ax fell on no less than seven heads (some joked that even the hot dog vendor was being traded to Cleveland). In the span of a few days, several of the most beloved players in the history of the franchise were sent packing.

Even first baseman Anthony Rizzo had to go. The popular fan favorite and four-time gold glove award winner was signed by the hated New York Yankees – driving their annual payroll well past $200 million. But in the end, fans can only trust that Presidents and GMs will make smart decisions that yield the best long-term results. Time will tell.


The same is true in the corporate world, where executives are always tasked with getting the most productivity out of their assets. That often means divesting units that underperform (or no longer fit) and acquiring new pieces to fill gaps and round out the team.

We’ve seen quite a bit of this lately. According to Refinitiv, global merger and acquisition (M&A) activity has reached $2.4 trillion thus far in 2021 – more than double the deal-making volume from this time last year. Clearly, managers are making up for the lost time.

And this could be just the beginning…


The Casino’s Landlord Gets Bigger & Better

As one of the nation’s largest real estate trusts, VICI Properties (Nasdaq: VICI) hasn’t been shy about making bold acquisitions. It has only been a few months since the company extended a $4 billion offer for the iconic Las Vegas Venetian resort.

The new owner just signed a 30-year lease at the rate of $250 million per year… about $684,000 per day. For VICI, that’s a healthy return of 6.25% on its investment. Yet, this transaction pales in comparison to the company’s latest conquest.


On August 4, VICI announced plans to assume control of MGM Growth Properties (NYSE: MGP). The transformative $17 billion stock-swap deal will give VICI the keys to mega-resorts such as Mandalay Bay and MGM Grand. The company already owned much of the real estate on the north end of the Las Vegas strip. Now it controls the south end as well.

Whereas VICI was created as a holding vehicle for Caesars and Harrah’s branded casinos, MGM Growth Properties was formed to manage the real estate of MGM Resorts (NYSE: MGM). These two REITs share the same business model – just different tenants.


Once this deal is finalized, VICI will add 15 new properties containing 33,000 hotel rooms and millions of square feet of convention meeting space. That includes the Mirage, Excalibur, Luxor, and New York New York. You might say the company is going “all-in” on the Las Vegas market. But the portfolio is geographically diverse and spreads from coast to coast. Future rental income will be split roughly 50/50 between Las Vegas and other regional gaming markets.

As the new landlord, VICI will be raking in $860 million in annual rent via a 25-year master lease – with automatic rate bumps each year to keep pace with inflation. Even by Las Vegas standards, this is a big transaction. It will create the world’s largest experiential real estate owner, with an enterprise value of $45 billion.


There are several long-term strategic benefits to this merger. But for now, the merger will be immediately accretive to cash flows. The company expects to generate $500 million in surplus adjusted funds from operations (AFFO) annually after dividend distributions. That cushion leaves room for future rate hikes, and we’ve had one already. Management just approved a 9% increase in the quarterly dividend to $0.36 per share – which raises the yield to a healthy 4.5%.

I see nothing but positives from this merger. MGP has expanded rapidly since its 2016 IPO, lifting its own dividends by 44%. Better still, these high-quality resorts were purchased at a 30% to 40% discount to what it would cost to build them today. And it’s worth noting that MGP collected 100% of its contractual rental income last year, despite worst-case scenario Covid lockdowns.

You don’t typically expect a REIT to outperform the S&P 500, but that’s exactly what we’ve seen with VICI. We’ve owned it in our High-Yield Investing portfolio since the summer of 2018, delivering a return of 67%, compared to the S&P’s 60%. But with this deal in place, it’s still worth a look for investors today.

Who Knew Trash Could Be So Profitable?

I first recommended Covanta (NYSE: CVA) just over a year ago in July 2020. At the time, many industries had been disrupted by Covid lockdowns and the future was uncertain.


But trash pickup was never in doubt. Covanta is one of the nation’s top providers of waste-to-energy (WtE) services. The company owns or operates 41 WtE facilities in North America. These plants take in 21 million tons of unwanted municipal garbage each year and convert it into 10 million megawatt-hours of electricity – enough to power more than one million homes.

Like solar and wind power, solid waste is deemed to be a clean, renewable fuel source.

This is a beautiful business model. Other power generators must pay for their raw materials (coal, natural gas, etc.). But Covanta’s fuel is free. Better than that — the company is paid to take it. Covanta provides waste disposal services to both commercial businesses and public sector entities, typically under long-term contracts.


So the company is paid to empty dumpsters, and then gets paid again when the contents are turned into electricity for utilities and other buyers. And those annuity-like, contractual revenues fuel an above-average dividend.

Apparently, we weren’t alone in our high regard for Covanta.

Just recently, a privately-owned infrastructure fund came forward with a generous $5.3 billion offer (including the assumption of debt). The buyer has agreed to pay $20.25 per share. A month ago, before rumors of a buyout started to swirl, CVA was trading at $14.78. That’s a healthy premium of 37%.


CVA is currently trading near the $20.25 bid price, an indication that the market sees few regulatory obstacles standing in the way of this deal. The buyout has propelled the stock past its pre-Covid levels to a new all-time high. 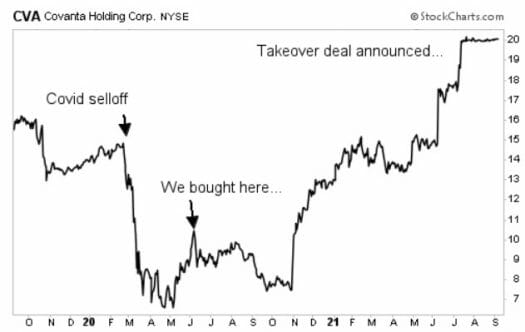 It’s nice to be on the receiving end of a takeover. It means we were able to enter the stock below $10 and exit above $20 – pocketing a nice triple-digit gain in about a year.

I’ve said it before, but it bears repeating… As we emerge from the Covid pandemic, expect to see a wave of deals over the next few years. Corporate coffers are full and interest rates are at record lows, which means it’s never been easier for companies to “buy” their way into growth.

All that to say, these two examples won’t be the last of deals like this. Get ready to see a lot more buyout activity in the months ahead.

In the meantime, if you’re looking for some of the best high-yield stocks around – the kind you can build your portfolio around and not have to lose sleep at night – then you need to check out my latest research…

Over at High-Yield Investing, I recently told my subscribers about a group of “bulletproof” dividend payers that has survived every downturn of the past few decades… and still raised dividends and delivered amazing returns to investors. And if history is any guide, they’ll continue to do so for years to come.

You can learn all about them by visiting this link.