Details of the Deal

Valued at $736.6 million, the contract is expected to be completed in December 2024. Through the latest modification, Pratt and Whitney will procure propulsion system spare parts, modules, support equipment/packaging handling shipping and transportation material, along with depot lay-in material to support the F-135 propulsion system requirements.

The majority of the work related to this deal will be executed in East Hartford, CT.

Rising security threats from terrorist activities and adverse geopolitical situations have resulted in increased demand for defense products, of which combat aircraft constitutes a major portion. With its advanced stealth capabilities, aircraft speed and agility, the F-35 jet dominates the combat aircraft market.

Consequently, demand for F-135 propulsion systems is expected to remain consistent in the coming years.


In fact, an inflow of contracts like the latest one is expected to further boost the top-line performance of the Pratt and Whitney segment, which registered solid 19% year-over-year growth in its adjusted sales in the second quarter of 2021.

Per an analysis by the Research and Markets firm, the global next-gen aircraft propulsion system market is projected to witness a CAGR of 16.34% during the 2025-2035 period. In particular, the United States is expected to dominate this market with an estimated share of 50.8% in 2035.

With Raytheon being a notable aircraft propulsion manufacturer in the United States, surely the aforementioned growth projections would benefit its operating results in the coming days.

Raytheon Technologies’ stock has gained 41.1% in the past year compared with the industry’s rally of 33%. 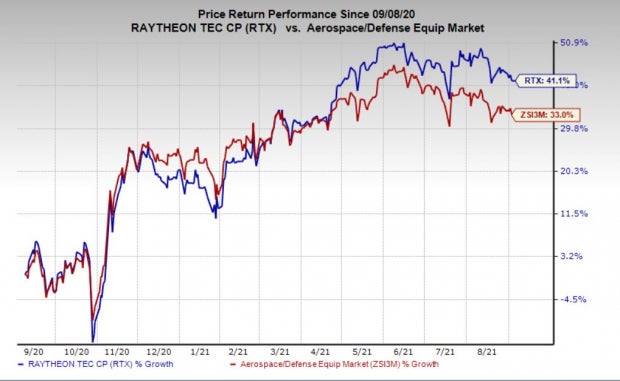