Agilysys, Inc. (NASDAQ:AGYS) SVP Kyle C. Badger sold 2,609 shares of the firm’s stock in a transaction on Tuesday, September 7th. The shares were sold at an average price of $54.75, for a total transaction of $142,842.75. The transaction was disclosed in a filing with the SEC, which is accessible through this link.

Agilysys (NASDAQ:AGYS) last announced its quarterly earnings data on Monday, July 26th. The software maker reported $0.21 earnings per share (EPS) for the quarter, topping the consensus estimate of $0.17 by $0.04. The business had revenue of $38.70 million for the quarter, compared to the consensus estimate of $36.92 million. Agilysys had a negative net margin of 12.67% and a positive return on equity of 29.93%. Agilysys’s quarterly revenue was up 29.9% on a year-over-year basis. During the same quarter last year, the company posted ($0.07) earnings per share. As a group, sell-side analysts expect that Agilysys, Inc. will post 0.55 earnings per share for the current year. 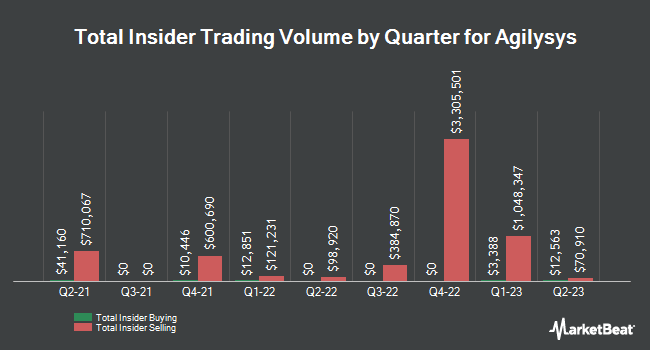