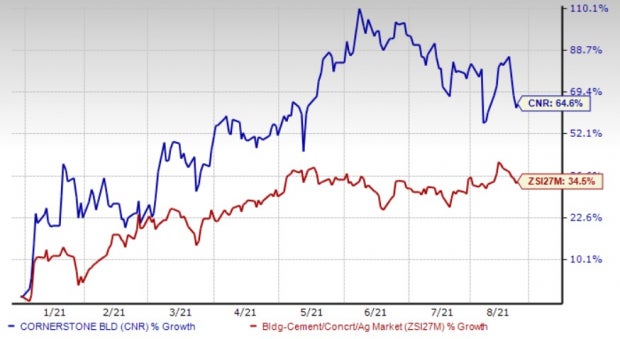 It’s not a done deal just yet, as the proposed legislation could get bogged down in the House before making its way to the President’s desk. Still, it seems likely that a tidal wave of spending could soon crash on this particular corner of the market.

It’s worth noting that progressives in Congress have threatened to stall the infrastructure bill unless even larger concessions ($3+ trillion) are made for social spending. But at this point, they don’t appear to have the votes to stall passage. And Wall Street is taking notice.

I’ve talked about our nation’s long overdue infrastructure repair bill before. And now that it seems like that bill may finally be remitted – by a check with 13 zeroes – it’s important to understand how we got here and just how big of an opportunity this is for investors…


The State Of Our Infrastructure

In its latest assessment, the American Society of Civil Engineers (ASCE) gives U.S. bridges a passable grade of “C”. However, 11 major infrastructure groups (out of 17) have been assigned a “D”.

The nation’s aviation system, for example, is just one notch away from a failing score. The same for locks and dams, hazardous waste sites, and mass transit systems. And if you silently curse all those potholes on your morning commute like me, consider that 43% of the nation’s roadways are deemed “mediocre or poor”.


We are spending money in all these areas – just not enough. Cash-strapped municipalities and government agencies have been underfunding these and other vital programs for decades, and the cumulative spending deficits have left us vulnerable.

Take water treatment and distribution. There are 2.2 million miles of underground pipes nationwide that carry clean drinking water to homes and businesses. Some of these lines were installed in the 1800s and are still in use today. Aside from corrosion and lead-tainted water supplies (remember Flint, Michigan?), we lose about 6 billion gallons per day to slow leaks and frequent water main breaks.

Water utility providers aren’t blind to the problem and have been spending about $50 billion annually on maintenance. But that’s mostly for patchwork repairs, as large-scale refurbishment projects have been repeatedly deferred. But they can’t be postponed forever. Tens of thousands of miles of water lines are now reaching the end of their expected 75-year lifespan.

Let’s just say there has been a lot of wear and tear.

The ASCE estimates that local, state, and federal government agencies will need to invest a whopping $5.9 trillion over the next decade to bring our dismal infrastructure up to a more respectable “B”. At this point, approximately $3.3 trillion has already been set aside.


That leaves a yawning gap of $2.6 trillion — equivalent to the annual GDP of the United Kingdom.

But that’s all about to change…

What’s In The Spending Bill?

Rebuilding the nation’s crumbling infrastructure is one of the very few topics in Washington that garners broad bipartisan support. President Biden has pledged to make it a priority, just as previous administrations did before him. We might bicker over the funding or various provisions, but are in general agreement that there is much work to be done.

When the infrastructure package was finally put to a vote in the Senate, it passed by a convincing 69-30 vote, meaning it won the support of 19 Republicans alongside all 50 Democrats. That’s about as close as you’ll see to a consensus these days.


The bill authorizes $450 billion to replenish existing programs and $550 billion in fresh new projects. If it stands, this will be the most ambitious infrastructure package in decades. As a percentage of GDP, it will be on par with the famous “New Deal” of the 1930s, when Hoover Dam and 34,000 other public works projects were undertaken.

While the numbers aren’t set in stone, a basic spending framework has been hammered out. Here are some of the dollar amounts involved:


This list isn’t all-inclusive. The bill earmarks funds for a wide array of projects, covering everything from electric buses and ferries to coastline preservation. Needless to say, this concerted push will funnel vast sums of cash into the pockets of well-positioned beneficiaries. And that always spells investment opportunity.

Bringing It All Together

One potential worry you may be thinking of is whether this is a classic case of investors “buying the rumor and selling the news”? Is it too late to invest in this theme?

It’s true that valuations have gotten stretched in some areas. US Steel (NYSE: X) has tripled from below $10 to $30 per share over the past 12 months. Martin Marietta Materials (NYSE: MLM), another aggregate supplier, has seen its shares soar from $210 to $380 and now trades at 33 times forward earnings, well above historical norms.


Still, there are values to be had. More importantly, this spending wave won’t crest and fall overnight – these unprecedented sums of cash will be doled out over the next five to ten years. So it’s important to gauge these companies not just on today’s earnings, but their future growth potential.

However you slice it, this is a big deal. And it could create a runway to profits that lasts for quite some time.

I just shared my top pick with High-Yield Investing subscribers. And later this week, I plan to dive further into the details with the rest of our readers. I’ll discuss which industries are likely to benefit the most, and share a few ideas on how investors can profit.

In the meantime, if you want to know about the absolute best income picks you can buy right now (or any time, really), then you should check out my latest report…

After months of painstaking research, my team and I have unearthed a group of five “bulletproof” high-yielders money that have weathered every dip and crash over the last 20 years. Every single one of these picks has a strong balance sheet, a proven track record of holding up in any market, and they continue to raise their payouts each and every year. And they all offer yields of 5% or more right now…

Warren Buffett's stock selections don't look like how they used to.