There’s another one. In what has become a regular occurrence, the S&P 500 climbed into uncharted territory above 4,545 last week.

Seems like we get a new high just about every week. For those of you counting, the index has now set more than 50 record highs so far this year. Let’s hope it books a few more before we close out 2021. 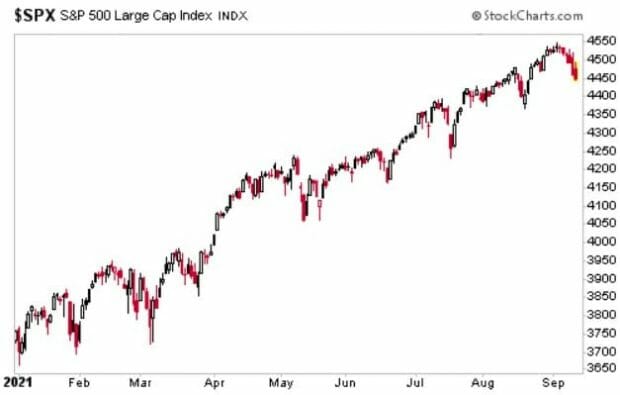 Along the way, the closely-watched benchmark has advanced 21.3%. That’s the good news. The bad news is that dividend distributions among S&P firms haven’t been able to keep pace. As a result, the paltry 1.5% yield at the start of the year has dropped to 1.25% today.

If that’s not an all-time low, it can’t be far from it.


Earnings certainly aren’t the problem. According to FactSet Research, S&P 500 profits surged 90% last quarter compared to a year ago. That’s the sharpest upturn since a 109% increase in the fourth quarter of 2009. It’s not a coincidence that both of these blowout earnings figures followed severe recessions the prior year (2008 and 2020 were both ugly), exaggerating the improvements.

Still, the recovery has been swift and the outlook is bright. Analysts are forecasting 28% growth next quarter, quadruple the historic average of 7%. But even with fattening bottom lines, executives continue to keep a tight grip on the purse strings.


That’s not to say we haven’t seen any dividend hikes lately. Between April and June, aggregate annual dividend raises among S&P 500 firms totaled $15.4 billion, versus $2.4 billion in collective dividend cuts – for a net increase of $12.9 billion.

But let’s put that figure in perspective. These same companies have dished out $485 billion to stockholders over the past year. So the extra $12.9 billion in yearly payments represents a mild increase of less than 3%. Remove the cuts from the equation, and the median dividend hike has been a little over 8%.


Good, but not great.

In years past, the nation’s largest businesses returned more than half of every dollar earned to stockholders. But payout ratios have sunk below 40% today, meaning more cash is being funneled into share repurchases, acquisitions, and other uses.

Meanwhile, inflation continues to roar, biting into your purchasing power. The latest monthly read on the Producer Price Index (PPI), which measures prices at the wholesale level, showed a hot 8.3% increase. That’s the steepest on record – for the fifth consecutive month.

The Federal Reserve and many media allies have downplayed the threat, dismissing it as a “transitory” phenomenon. But as we’ve discussed, inflation has already been stronger (and more persistent) than the experts expected. And rising wholesale costs are a leading indicator of further pricing pressure at the consumer level going forward.

I see it almost daily. Krispy Kreme just announced plans to raise donut prices, citing rising costs for oil and sugar. And it’s not just raw materials edging higher, but also labor and transportation. Meatpacking plants, for example, are notoriously short-staffed, which has led to elevated beef prices. So get ready to pay a bit more at Burger King for your next Whopper combo.


Once spilled, inflation is tough to put back in the bottle. And rising interest rates are never far behind. That’s why I’ve been transitioning my High-Yield Investing portfolio in favor of holdings that either act as a natural hedge, or even benefit from higher rates.

But that defensive stance doesn’t mean we’re sacrificing yield. In fact, the portfolio generated $1,005 in dividends and interest last month and $970 the month before. So I can’t wait to see what we collect once rates begin to normalize.

I’ve mentioned in previous articles lately that many income-minded investors seem to think that all the good high yielders are gone. And while the average S&P 500 yield is at the lowest point I can remember, we’re finding plenty of solid income payers over at my High-Yield Investing premium service.


In fact, I’ve got several dividend growers in my sights as potential future additions to our portfolio. In the meantime, we can rest easy knowing that we hold a solid set of income-payers that steer us through whatever the market has to throw at us — and rewards us with more income each and every year.

Unfortunately, people seem to be too quick to blame the Fed and abandon their search for quality income payers. And while there are certainly good reasons for this, I think that’s a mistake…

That’s why I just released a new report about five “bulletproof” income payers who have proven to be so strong, so reliable, and so generous… that they can be counted on, no matter what happens with the economy.

Each of them yields over 5% right now. And each one has provided fantastic long-term returns. I have little doubt that they’ll continue to do so for years to come.

Go here to check them out now.