It has been a summer to forget for cannabis investors. Over the past three months, the ETFMG Alternative Harvest ETF has fallen nearly 18% and the Advisor Shares Pure Cannabis ETF has dropped more than 11%. Over that same period, the SPDR S&P 500 ETF has risen 7%.

There are reasons for the drop, of course, but some of them are overblown. Concerns about the delta variant’s spread are unfounded considering how well marijuana companies fared when things were shut down last year.

Another more valid concern is the cold water that came in July with the long-awaited release of the draft of the Senate bill that would legalize marijuana at the federal level. The level of taxes in the bill were high — as much as five times that proposed by the MORE Act that was passed by the House at the end of last year. On top of that, the Senate bill would require 60 votes to pass, meaning at least 10 Republicans would have to vote yes, even if every Democrat voted for it.

While those factors may explain the general malaise surround marijuana stocks these days, they also provide an opportunity to buy in on companies that are doing well even if their share prices don’t yet reflect it. Here’s why investors should consider Trulieve (OTC:TCNNF), Jushi Holdings (OTC:JUSHF), and Cresco Labs (OTC:CRLBF). 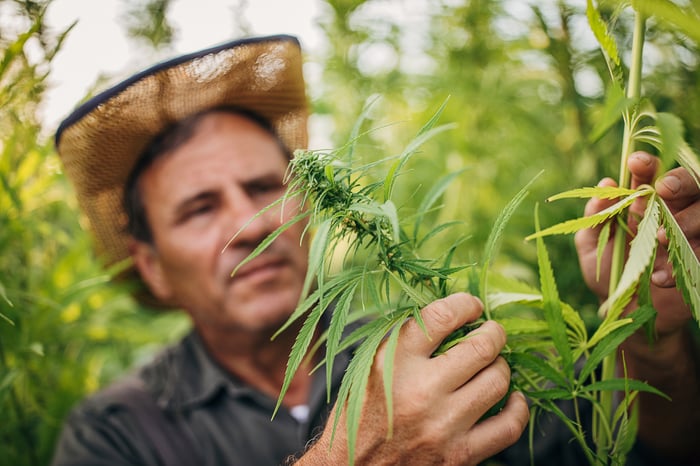 Trulieve’s shares are down more than 23% over the past three months. Some of that is due to concerns the company will be impacted by a federal bribery trial against John “J.T.” Burnette, the husband of Trulieve CEO Kim Rivers. As Burnette is not an employee of Trulieve, it remains to be seen exactly what the effect of the trial might be.

The company continues to grow. It recently opened its 88th dispensary in Florida, the company’s 97th location nationwide.

That doesn’t include the company’s purchase of Harvest Health, which Trulieve says will give it combined 2021 revenue of $1.2 billion. The deal was approved by Harvest stock holders last week but still must still be approved by state regulators.

About the only chink in Trulieve’s armor is its profit margin of 67% so far this year is down from the 70% margin it enjoyed at this time last year. As the company grows and matures, however, Rivers recently said some profit margin “compression” is to be expected.

Jushi Holdings is one to watch

Jushi Holdings’ shares are down more than 17% over the past three months, despite some of the strongest growth in the industry, with revenue growth of 3,240% over the past five years.

The company isn’t due to report its second quarter until Aug. 25, but it “pre-announced” second-quarter reported revenue of $47.7 million, up 14.6% sequentially and 219.7% year over year. The company also reported adjusted EBITDA of $4.6 million and trimmed its net losses from $28 million in the first quarter to $11.4 million in the second quarter.

Jushi is a multi-state operator with 34 retail stores across six states, but it is focusing on Illinois, Pennsylvania, and Virginia, densely populated states with limited cannabis licenses, figuring they will be more profitable. Illinois already allows recreational sales, but Pennsylvania and Virginia, both medical marijuana states, are expected to open up to recreational-use marijuana in the next few years.

Cresco Labs is making a name for itself

Cresco is a decent-sized MSO with 32 operational dispensaries and 44 licenses, but what sets Cresco apart from other cannabis companies is its wholesale sales. It topped the nation with $108.7 million in wholesale revenue, up 13.7% sequentially and 97.9% year over year. The profit margins on wholesale sales aren’t as high as retail, but it has lifted the company’s profile at the retail level.

The company’s gross profit margin of 48% in the quarter was a big jump from the 33.7% it showed in the same period last year. It has been growing its business with some big moves, buying seven companies in the past five years.

In April, it completed a $213 million deal to purchase Florida-based Bluma Wellness and its eight dispensaries, with another seven permits for dispensaries. The deal was Cresco’s first foray into the Sunshine State and gave it locations in seven of the 10 most populous states.

It also spent $158 million in March to buy Massachusetts-based Cultivate, adding three dispensaries in that state. 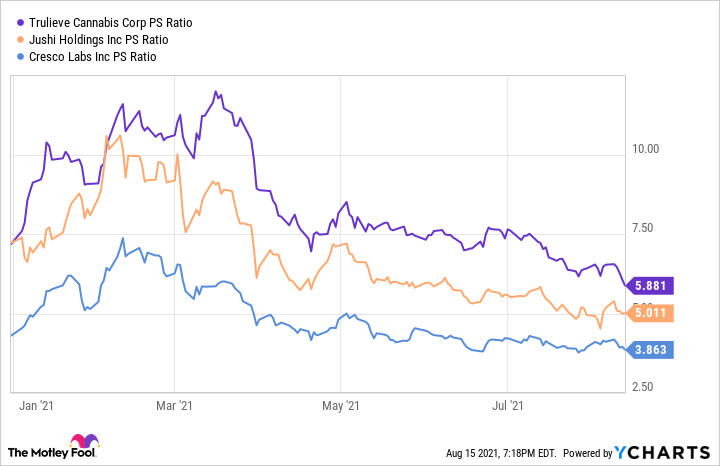 The choice comes down to comfort and price

I like all three marijuana stocks, particularly at their current prices. Of the three, I’m most bullish right now on Cresco Labs. The company just became profitable, yet its price-to-sales ratio is the lowest of the three stocks at 3.86. I think it already has strong national recognition thanks to its brands and that will serve it well whenever federal laws regarding marijuana sales loosen up.

I also like Trulieve because the company has the longest record of financial stability of the three and the best profit margin. Instead of just wildly buying up companies, it has carefully mapped out its domination in Florida and will be looking to do the same in Arizona as it opens to recreational sales, thanks to its purchase of Harvest Health.

Jushi Holdings is the smallest of the three, so there’s a little more risk, but like Trulieve, it has a clear roadmap toward expansion that should serve it well, particularly three to five years down the line.